“They wanted a product using an existing coaxial cable because installing an IP based CCTV integration solution includes a large scale upgrade of cable infrastructure, which is unsuitable in terms of cost and efficiency”
– Korea Expressway Corporation’s persons concerned - 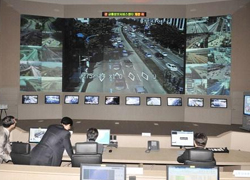 Request item
Korea Expressway Corporation controls 21 lines of nationwide expressway over 2,040km with a view to contributing to the development of road traffic through the installation and control of roads as a Korean government invested institution. Korea Expressway Corporation wanted to upgrade an intelligent traffic system(ITS) into a HD-CCTV in order to provide traffic information of clear image in establishing an ITS, and WEBGATE proposed a HD-CCTV integration solution of low cost using an existing coaxial cable. An ITS is a low-cost and high-efficiency traffic system to develop and use real-time traffic information by fusing IT(information technology) and automobile technology into the existing traffic system.

Solution
The intelligent HD-CCTV system of WEBGATE Company selected as a contractor through a bidding process can not only clearly recognize a number plate most used in the existing crime prevention in a megapixel class by activating the car number plate recognition, but also get a big effect in tracking a crime because it can identify an object even under a light at a dark night. For example, a local policeman said that using WEBGATE’s number plate recognition function that clearly picked the number plate of a parked vehicle in a railway rail robbery accident having occurred recently was a big help for an investigation.

Result
Korea Expressway Corporation gradually introduced 62 HD-CCTV cameras of the same quality as a HDTV over 2010 through 2011 by judging that WEBGATE’s HD-CCTV is excellent in cost as a result of showing an example. The WEBGATE Company successfully installed an existing coaxial cable and a CCTV network within its designated budget according to the planned schedule, and the new system is smoothly working without trouble so far.

The manager expressed his satisfaction feeling, “The image quality is very superior. It can clearly identify all persons’ face within the public area concerned. The camera is activated every second, and the video image is recorded along with the date record to enable one to relatively easily track the day on which an accident occurred. In addition, we have a system furnished with a high image quality, broad monitoring area and good audio function and are using this system very easily without difficulty.”

WEBGATE’s solution has settled down without abnormality in use at an intelligent traffic information system now for almost 2 years, and is perfectly working without defect. We provide the best product at low cost through a fast service confrontation to the solution and a continuous software upgrade.