The needs for high-definition video surveillance are expanding rapidly. To meet the market demands and to complement IP-based video surveillance system's weaknesses, HD-CCTV products, based on HD-SDI transmission technology, are rapidly spreading in the market. Changing from analogue system to IP network system requires dramatic changes from designing to operation. Also, IP network system demands more cost with higher technology, which became a burden for the many people who are familiar with conventional analogue systems. This is where HD-SDI came in, proven HD-SDI transmission technology to configure high quality HD video surveillance system, with conventional coaxial cable. It holds many advantages especially in its low latency and lossless video quality. It has proven itself to be more suitable than IP system when best quality or lossless video are requested.

Not only this DVR provides the best performance in recording/playback, it can supply power to the connected cameras and control whole camera functions through coaxial cables. Along with this “One Cable Solution”, new features including RAID to enhance the reliability of recorded data and DoubleReach™ to enhance the HD-SDI transmission capability.

From the World’s first HDcctv camera certificate from 2010, WEBGATE now holds total of 39 HDcctv Alliance certificates throughout their products. WEBGATE also received “Compliance Leadership Award” for the last 3 consecutive years from HDcctv Alliance. This only not proves that WEBGATE is the pioneer in HD-CCTV market, but it also shows that WEBGATE is the leader in the world of HD-CCTV market. Let’s have a close look at the new product HD1600F-PDR and see its functions, features and how this will lead the HD-CCTV market in the future.

HD1600F-PDR is by far the best HD-SDI DVR. Providing 480fps monitoring, recording and playback for all 16 channels(30fps each, total of 480fps) and providing real-time, smooth and lossless video recording even on 16 channel split screen. Operator can assign recording quality and frame rate differently per each channel, and it provides more than 1200TV line resolutions both at monitoring and playback.

Maximum of 5 SATA hard disks can be installed in the HD1600F-PDR and can be expanded by connecting eSATA external storage device (up to 16TB) or WEBGATE’s dedicated storage device (up to 64TB). Various search methods are also available including date/time, calendar, timeline, event, Thumbnail, smart, text. Furthermore, At-the-PC playback function allows users to directly play DVR’s hard disk at the customer’s PC.

HD1600F-PDR’s network video streaming ability has significantly increased. It supports dual encoding of H.264, JPEG and they provides multi-streaming of HD(1920x1080) and nHD(640x360). WEBGATE also provides integrated network management software “Control Center” which can manage up to 1,024 DVRs with various methods including e-map and view-set. Not only that, WEBGATE supports Java viewers to support internet explorer and other browsers including Chrome, Firefox and Safari. Mobile App is available for Android and iPhone users, and provides SDK for simple, powerful software customization.

Because HD1600F-PDR can supply necessary power to connected all 16 cameras, the cameras do not need additional power supply and its installation process.

Regarding video transmission distance between HD DVR and camera, up to 200m video transmission is possible by using 5C-HFBT coaxial cable which is recommended by WEBGATE. To increase the transmission distance, PoC repeater RP101P can be also used. Because RP101P supports PoC function, this also does not need additional power supply, allowing it to be installed anywhere without inconvenience. In order to operate PoC safely, DVR automatically detects PoC/Non-PoC cameras, blocks overcurrent and shows status of the PoC.

With CoC function, DVR can control cameras through coaxial cable and this means additional RS485 communication cables are not necessary. With just single coaxial cable, camera’s OSD menu, Zoom/Focus control, firmware upgrade, and “one-push auto focus” functions are available. And as for the PTZ domes which consumes a lot of power, RP101P can be used to operate CoC function only.

HD1600F-PDR can receive DoubleReach video for odd channels without additional equipment and users can easily relocate channels which are displayed on split-screen.

This technology is especially handy when it comes to upgrading existing analogue CCTV system. Because DoubleReach™ technology reduces the HD-SDI signal bandwidth from 1.5Gb/s to 270Mb/s, where old, low quality existing cable can be effectively used to transmit HD-SDI signal, making the users to configure HD video surveillance system with ease.

Maximum 5 hard disks can be installed in HD1600F-PDR, and DVR can support RAID using these hard disks. Users can configure RAID level 1, 5, 10 and it raises the reliability for recorded data by supporting easy data recovering when a hard disk is damaged. 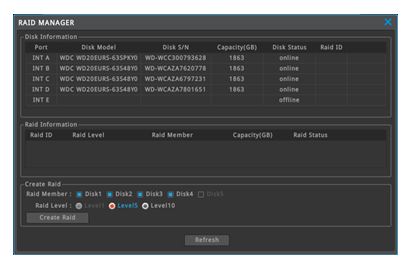 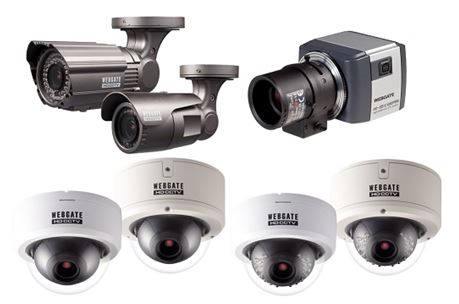